It's hard to avoid a background in needlepoint and sometimes you want something other than basketweave stitch (although this is our all-time favorite). So, without further ado, the three needlepoint background stitches we use most often are (drum roll): An Upright Cross Stitch covers a needlepoint canvas really well and it looks textured and rich - a bit like a knobbly carpet. It's a non-directional stitch, so the eye doesn't create movement from it. This is usually what you want for a background because you want it to do just that - remain in the background. There are exceptions to this, of course – if your background is water or swirling clouds then you might want a stitch that illustrates this movement.

Here's how you make a needlepoint Upright Cross Stitch. Although the Upright Cross is a straight stitch, you might want to reduce your thread thickness as it requires the needle to come up or down three times in the same hole. This can make for a tight squeeze in there, but it's also why it looks so smart on the canvas.

An Upright Cross Stitch fits nicely in small spaces. It's handy for stitching irregularly shaped areas and it's straightforward - no counting, just an easy repetitive pattern.

You can even make the cross stitch an open stitch by leaving regular gaps between the crosses. This belt buckle image shows this with a regular cross stitch, but you could also do this with an Upright Cross Stitch. 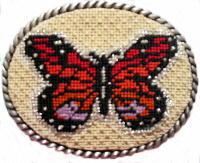 If you want to learn more you'll find further instructions for the Upright Cross Stitch on the American Needlepoint Guild's website here.

The needlepoint Brick Stitch can be horizontal or vertical. It looks like subway tiles when stitched horizontally. The Brick Stitch offers good canvas coverage without overwhelming any of the surrounding design objects. 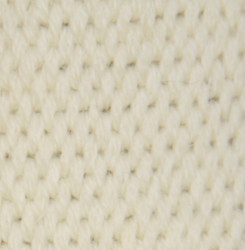 The T-Stitch is an open stitch so it leaves some of the canvas showing. It would probably be better named the Drunken T Stitch because it's really a T lying on its side. It looks like a cross stitch where the crosses have come apart, but in a very orderly manner.

The needlepoint T Stitch is quick and easy to stitch once you have the pattern memorized.